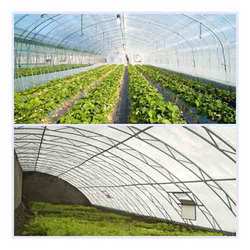 Ever changing weather condition in our country leads to uncertain growth of quality crop. Controlled Environment Agriculture – UV Polyethylene Film has proved to be highly economical and effective in controlled environment agriculture, especially in Greenhouse. The plants grow more uniformly and with more vigor and are less susceptible to disease with richer colors in their blossoms and leaves. It also increases the productivity of fruits, flowers, vegetables, medicinal plants, tissue culture etc. by reducing the diseases and pests. 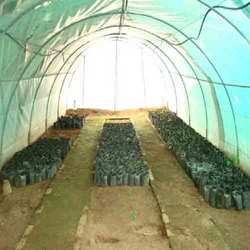 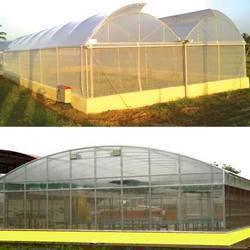 Ultra violet Green house film  provides a controlled and favourable environment for the crops to grow in all seasons. The technology saves crops from cold in winter, from heat in summer and from rain in monsoon.
U.V stabilized green house film is more suited to vegetables crops (such as tomato, brinjal, cauliflower, capsicum, cabbage, chillies, ladies finger, spinach etc.), flowers (like rose, gerbera, carnation etc) and nursery for all vegetable crops, because of their small life-span. This technology is mainly suitable for commercial farming, as it requires investment in setting up the entire framework. It involves a structure similar to a house, in which only sunlight is allowed to enter. It has mainly two parts, first is a frame or the basic structure made of galvanized iron pipes, bamboo, woods and iron rods, and the second is the cladding or covering material made of plastic films. 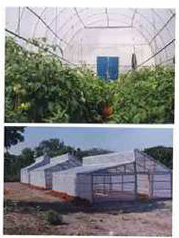 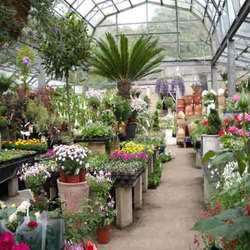 A nursery is a place where plants are propagated and grown to usable size. Although the popular image of a nursery is that of a supplier of garden plants, the range of nursery functions is far wider than that, and is of vital importance to many branches of agriculture, forestry and conservation biology. Some nurseries specialize in one phase of the process: propagation, growing out and then selling. Some produce bulk stock, whether seedlings or grafted, of particular varieties for purposes such as fruit trees for orchards, or timber trees for forestry. Some produce stock seasonally, ready in springtime for supply to colder regions where propagation could not have been started so early, or to regions where seasonal pests prevent profitable growing early in the season.

A pilot experiment, also called a pilot study, is a small scale preliminary study conducted before the main research, in order to check the feasibility or to improve the design of the research. Pilot studies, therefore, may not be appropriate for case studies. They are frequently carried out before large-scale quantitative research, in an attempt to avoid time and money being wasted on an inadequately designed project. A pilot study is usually carried out on members of the relevant population, but not on those who will form part of the final sample. This is because it may influence the later behavior of research subjects if they have already been involved in the research.

Pilot experiments are also used to reduce cost, as they are less expensive than full experiments. If there is not enough reason to provide full scale applications, pilots can generally provide this proof.